National Park Service researchers recently re-captured the female mountain lion known as P-53 and treated her for mange, a parasitic disease of the hair and skin. Mange is generally rare in wild cats, however, it has been widespread in bobcats in the Santa Monica Mountains area since an epizootic started in 2002 caused extensive mortality and a significant population decline.

This is the fifth case of mange in mountain lions since the study began in 2002. Previous cases have not led to severe debilitation, emaciation, and death, as generally occurs in bobcats, although the first two of these mountain lions cases (P-3 and P-4) died from uncontrolled bleeding as a result of anticoagulant rodenticide poisoning.

P-53 (current photo with mange and before without mange) 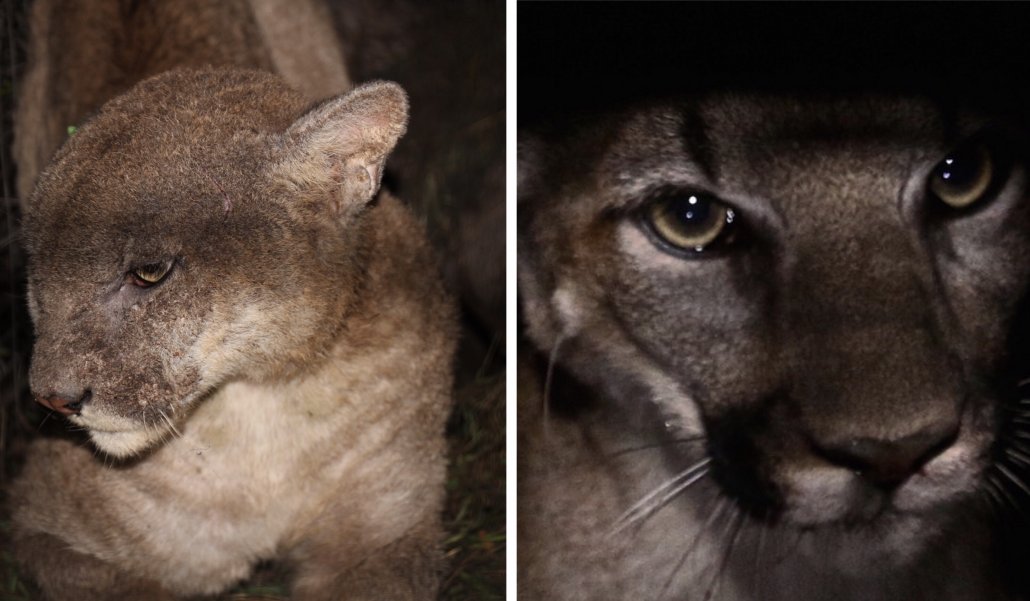 The connection between exposure to anticoagulant rodenticide and mange is still not fully understood. More is known about mange in bobcats, with previous NPS research finding that bobcats that have ingested rodenticide are much more likely to suffer from severe mange. More recently, intensive work with colleagues at UCLA has documented both significant immune system effects and widespread impacts on gene expression in bobcats exposed to rodenticides.

“It’s concerning to see this mange in a mountain lion, because it generally means that the animal is compromised in some other way such as having been exposed to toxicants,” said Seth Riley, wildlife ecologist for Santa Monica Mountains National Recreation Area and adjunct associate professor at UCLA. “We are hopeful the treatment will be successful and that we can monitor P-53’s recovery through remote camera images.”

National Park Service researchers have documented the presence of anticoagulant rodenticide compounds in 17 of 18 local mountain lions that they have tested, including in a three-month-old kitten. Mountain lions are likely exposed through secondary or tertiary poisoning, meaning that they consume an animal that eats the bait, such as a ground squirrel, or an animal that ate an animal that consumed the bait, such as a coyote. See infographic on how rodenticide can work its way up the food chain.

P-53, who is three and a half years old, was recaptured and outfitted with a GPS collar on February 10. Previous remote camera photos had indicated that she likely had mange, so NPS had already consulted with veterinarians and disease experts with the California Department of Fish and Wildlife. Upon confirming her mangy appearance at the capture, biologists treated her with selamectin, a topical treatment for ectoparasitic diseases such as mange, fleas, and ticks. 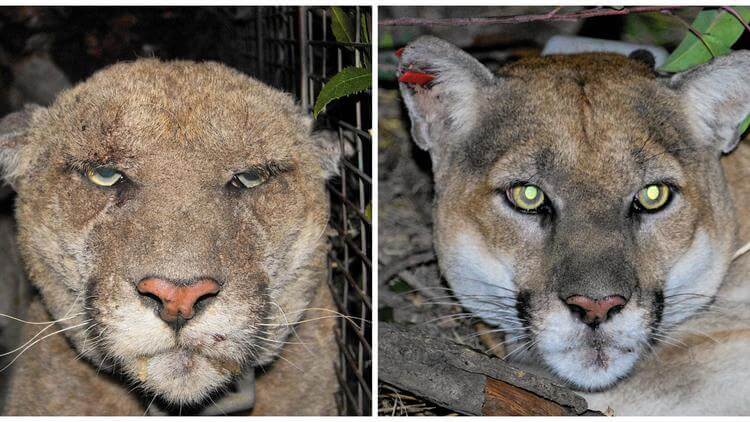 P-53 is one of the surviving siblings from a litter of kittens P-23 birthed in the summer of 2015. Her home range consists of the central Santa Monica Mountains, towards the coast.

Since 2002, the National Park Service has been studying mountain lions in and around the Santa Monica Mountains to determine how they survive in an increasingly fragmented and urbanized environment.

The California Department of Fish and Wildlife is responsible for overseeing the management and conservation of mountain lions in the state.

The March 17th event in Chatsworth marks the 80th anniversary of the Stagecoach Road plaque dedication.  There will be a re-dedication commemorating the event. Glenn Bailey from the Neighborhood Council is the emcee, and will introduce Councilman Greig Smith who will present a scroll to the Native Daughters, as will other politicians. There will be historical exhibits and hikes along the old Stage Road to the plaque. For information about attending the event see https://www.hikingwithdean.com/event/old-stagecoach-trail-dedication/

The Old Stagecoach Road in Chatsworth was used from 1860 – 1890. It provided an inland route between Los Angeles and Santa Barbara that was shorter than the coastal route.  The first overland stagecoach to use the pass made its run between San Francisco and Los Angeles on April 6, 1861.

There were several stagecoach lines but the one through the Santa Susana Pass, between Simi Valley and Chatsworth, was the most steep and dangerous. This pass on the Chatsworth side was called “The Devils Slide“, and for good reason. The road was carved out of the sandstone rock by hand, and holes were drilled so that steel pins were set so that block and tackle could ease the coaches down the grade (you can still see the pick marks and drill holes). The slide, the old stage road and a portion of the Simi Hills are preserved in the Santa Susana State Historic Park.

On March 17, 1939, A dedication ceremony commemorating the Stagecoach Trail at Devils Slide was held by The Native Daughters of the Golden West.​ The event was captured on movie film. The movie was donated to the Chatsworth Historical Society by Betty Summers. It belonged to her Aunt Olga Bay, who was a member of the Native Daughters of the Golden West and a participant in the dedication ceremony. Here is that film from 1939:

In 1895 the stagecoach route was replaced by the “El Camino Nuevo,” also known as the Chatsworth Grade. The new road provided an easier and smoother route to transport goods and was also able to accommodate motorized vehicles. This road was re-aligned and replaced in 1917 by today’s Old Santa Susana Pass.

For a complete history of the Old Stagecoach Road see this presentation below, provided by Ann and Ray Vincent of the Chatsworth Historical Society.

On Saturday March 17, 2019 Chatsworth will be commemorating the 80th anniversary of the Plaque dedication. Below is the flier for the event. I will be leading a hike to the plaque and beyond. For more info about my hike see https://www.hikingwithdean.com/event/old-stagecoach-trail-dedication/

A portion of the Backbone Trail managed by the National Park Service in Malibu reopened March 1, along with the popular Grotto Trail in the Circle X area.

The majority of the 67-mile Backbone Trail is now open, with the exception of a four-mile stretch from Yerba Buena Road to the Mishe Mokwa Trailhead and a six-mile stretch from the Kanan Trailhead east to the Corral Canyon Trailhead. Large portions of the trail have been closed since the Woolsey Fire destroyed 88% of federal parkland in Santa Monica Mountains National Recreation Area last November.

“Our small trails crew, assisted on some days by our valuable partners, which include members of the California Conservation Corps, Camp 13 and the Santa Monica Mountains Trails Council, did a phenomenal job in restoring these trails,” said David Szymanski, superintendent of Santa Monica Mountains National Recreation Area. “An especially rainy season hindered the work and created a variety of additional hazards, but these folks really came through and made it happen.”

Other trails and areas in the park still closed include Solstice Canyon and trails in Zuma/Trancas Canyons.

Scroll down to see photos of the extensive post-fire work (including some before and after photos) that was done to mitigate safety issues caused by “hazard trees” (trees that were badly burned in the fire and are susceptible to falling), eroded trails and warped, burned culverts. Tasks included clearing trails of hazardous rocks, branches and sticks and reestablishing trail pads by spreading any slough that fell from the hillsides onto a trail and finding large rocks and dirt to fill deep ruts that cut directly across trails.

Although these areas are open, there is a closure order for all burned areas that restricts the public to the trails only. Visitors are being asked to stay on trails and be aware that numerous safety hazards still exist. Hikers going off trail can cause more damage to newly restored trails, trample new plants, and prevent the re-growth of fragile vegetation.

The NPS trail crew collaborated on multiple sections of the Backbone Trail with local members of the California Conservation Corps and Camp 13, the only all-female, Malibu-based fire camp in Los Angeles that occasionally assists with trail work. The Santa Monica Mountains Trails Council also helped repair a portion of the Backbone Trail section along Kanan Road in Zuma Canyon.

Backbone Trail repair work – Click on an image to enlarge 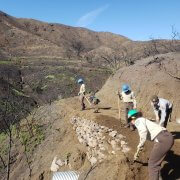 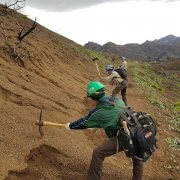 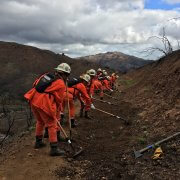 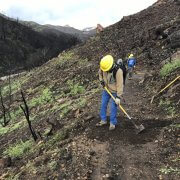 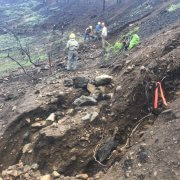 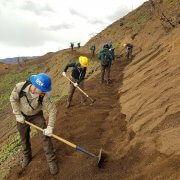 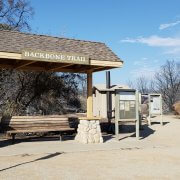 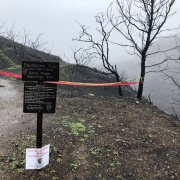 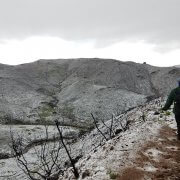 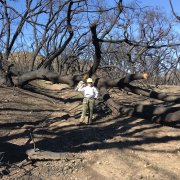 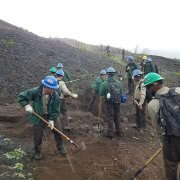